Butterscotch
December 1990 - June 1996
Butterscotch used to start squeaking when she would hear
the front door open, knowing it was me coming home.
She liked to stay near me when she got floor time. Lexus
July 1991 - September 1996
Lexus was always a little pig, smaller than Butterscotch.
Unlike Butterscotch, Lexus loved to run around on the floor,
zipping back and forth behind the couches. 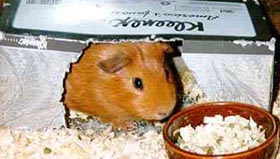 Nutmeg
Adopted June 1996
Here Nutmeg was only a couple of months
old and could still fit in a kleenex box.
Now he is so big that he hides under half of a log. 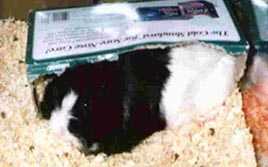 Whiskers
Born July 1996
Adopted September 1996
Whiskers is my carrot lover.
When I first got him, the only treat he would eat is carrots. Since
then he has gotten a taste for cantaloupe and green peppers, too. 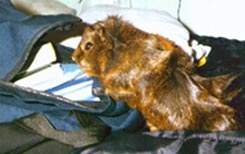 Sienna
Adopted December 1996
Sienna is the loudest pig I have ever heard!
When I got her she was just a little pig, but she was so loud!
She makes sure that I know when it's time to eat! 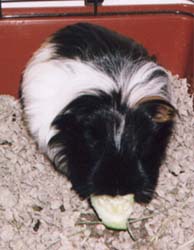 Introducing . . . Brittney!
Adopted March 1, 1998
Rescued through a fellow guinea pig lover on the internet!
She is the thirstiest guinea pig! And she loves cucumbers!
And after all that she's been through, she still has a wonderful attitude!

Need a translation of this page? Try these...
French    German    Italian    Portuguese    Spanish